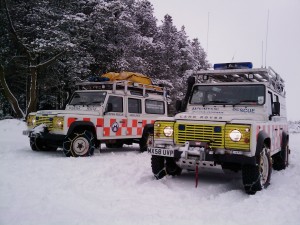 Mountain rescue teams respond to a wide variety of different incidents, over rugged terrain, often a good distance from the nearest road. And teams are often called to help in extreme weather conditions, or when roads are flooded or covered in snow and ice.

Consequently, the majority of mountain rescue vehicles are four wheel drive and, more often than not, Land Rovers, which allow a hill party of five and all of their equipment to be taken as close as possible to the casualty site.

Vehicles are modified – and liveried appropriately with blue lights and emergency markings, as well as a team’s identity – to suit the needs of the individual team. Some may purely be people and equipment carriers, but the majority are adapted and fitted out to enable use as an ambulance (and registered thus) capable of transporting a casualty to hospital if necessary.

Additionally the team have a Mercedes Sprinter van converted into a self contained mobile control unit with full radio facilities, extendable mast, Computer mapping and search software, Satellite Internet connectivity along with welfare facilities for the team.  This vehicle is also fully fitted out to be used as an ambulance should we need to use it in that role.