A 13.1 mile challenging off road half marathon or 10km

Starting from Ravenscar Village Hall situated 700 feet above sea level, overlooking Robin Hood’s Bay in the North York Moors National Park and midway between Whitby and Scarborough. The route then gently descends the beautiful coastal path along the dramatic sea cliffs, with panoramic views down the coast line towards Scarborough.  On reaching Petard point its through Staintondale via open fields, woodland and the disused railway line until you reach Cloughton Wyke. Then its back to Ravenscar all the way on the coastal footpath via the via the picturesque roller coastal of Hayburn Wyke (that’s a nice way of saying a killer of a down and uphill section that will make your legs and lungs burn). Then back to Ravenscar for those stunning sea cliff views (though you will still be sweating from the last bit and hoping for the sea wind not to blow).

In 2015 we added a 10k event. The route follows the path of the old railway south to Staintondale then returns via Shire Oaks Farm to Petard Point and then North up the coastal path. 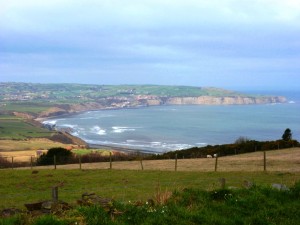