Resumption of incident 15/2020.  At the request of North Yorkshire Police we returned to the area of yesterday’s callout to search rural land to the south east of Whitby Abbey.  Sadly in the late afternoon a body was found by one of the police search teams and we were stood down.   Fourteen team members deployed for six and a quarter hours.  Our thoughts and condolences go out to the gentleman’s family and friends at this difficult time. 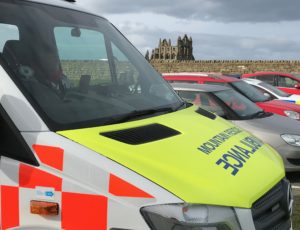 Called by North Yorkshire Police to assist in the search for a gentleman missing form home in Leyburn whose car had been found earlier in the day at Saltwick Bay just south of Whitby.   Despite comprehensive searches by ourselves, the local HMCG teams, a HMCG Helicopter and the police no trace was found of the gentleman and we were stood down by the police.  Twenty team members deployed for six and a half hours.

Called by Yorkshire Ambulance Service to an injured horse rider in a remote, wooded location south of Leavening. We were initially stood down soon after the first call as an ambulance was on scene however were called again when the vehicle struggled to get up the unmade track with the patient.  We deployed to site, transferred the casualty to a Bell Stretcher and transported her to the waiting Air Ambulance before recovering the ambulance back to the road with one of our Land Rovers.   Fifteen team members deployed for three hours and the first outing for the Lyon Equipment universal stretcher wheel to ease a protracted carry out on uneven ground. 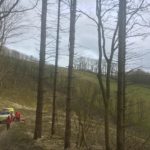 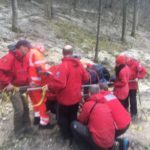 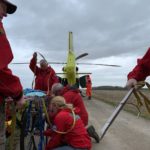 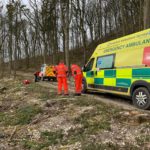 Team delayed in support of North Yorkshire Police in the search for a hight risk vulnerable male missing from home.   Fifteen team members searched through the night and into the early hours of the following morning before being stood down by the police at 06:00 on the 2nd.

Water rescue assets placed on standby by our local resilience forum (LRF) to respond to potential overtopping of the flood defences in Hirst Courtney. Fifteen team members stood by for six hours.

Called by Humberside Police to assist in the search for a high risk vulnerable male missing from home in the Bridlington area. As our incident controllers were taking the details we received notification the the gent had returned home and was safe.

Called by Yorkshire Ambulance Service to reports of a 59 year old female who had fallen on the rocks at Hawsker Bottoms and sustained a suspected fractured wrist.   Team mede ready to respond until, we could conform the local Coastguard team were being deployed.

Water rescue assets placed on standby by our local resilience forum (LRF) to respond to flooding incidents as a result of Storm Dennis.    Twelve team members stood by for seven hours.

One of our water rescue teams and a team vehicle placed on standby to assist Upper Wharfedale Fell Rescue Association (UWFRA) who were responding to reports of flooding in the Pateley Bridge area.   By late afternoon the water levels had started falling and the team were stood down.

Administered first aid to a lady taking part in the Noego Torch Challenge who had sustained a lower leg injury.

Deployed following a call from North Yorkshire Police to reports of two walkers who had become disorientated in failing light on a walk around the Falling Foss/Littlebeck/Maybeck Area.   We quickly established their location using the PhoneFind utility from within the Mountain Rescue England and Wales SARcall application and deployed team members to meet with them and escort them back to their transport at the  Falling Foss car park.  We had six team members deployed for one hour. 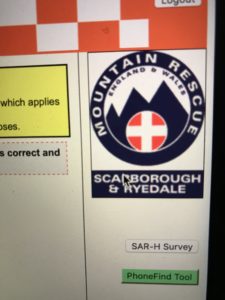 One of our Incident Controllers in discussion with Cleveland MRT as to which team could get to this location quickest to assist Yorkshire Ambulance Service in the rescue of an injured mountain biker.   As Cleveland we already deployed on training they were best placed to attend.

Called by Yorkshire Ambulance Service to reports of a two walkers who had fallen on the path leading to the bottom of the Mallyan Spout Waterfall.
Once on site it was established that the gentleman had sustained bruising to his chest and was suffering from cold and that his partner was complaining of severe back pain after falling across a rock step.

The gentleman was walked slowly back to the top of the path for more detailed assessment and warming in a team ambulance while the lady was packaged in a team vacuum mattress before being carried by the team to the waiting Yorkshire Air Ambulance and a flight to definitive medical care.

The gentleman was subsequently assessed by the Yorkshire Ambulance Service crew and deemed fit to leave the scene at which point we drove him to his car in Goathland village.

Thank you to the Mallyan Spout Hotel who provided a warm drink for the gentleman and to the passing walking party who donated £40 to the team. 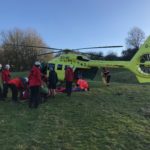 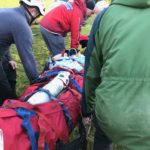 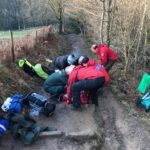 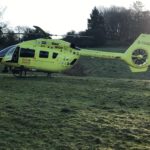 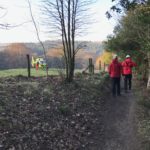 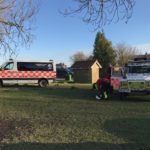 Called by Yorkshire Ambulance Service to assist them and Yorkshire Air Ambulance in the treatment and evacuation of a lady who had sustained a lower leg injury and then fallen part way down down a Motte and Bailey Earthworks south of Burythorpe on the edge of the Yorkshire Wolds.
After the patient’s injuries had been stabilised and she had been lifted into our Bell stretcher we hauled her to the top of the earthworks before transfer to the air ambulance and evacuation to definitive medical care.
Sixteen members deployed for three hours. 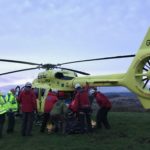 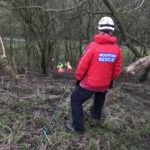 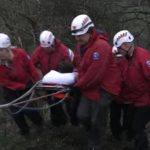 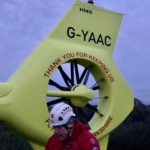 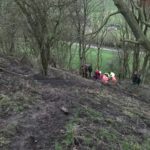 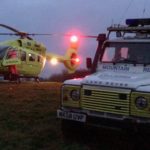 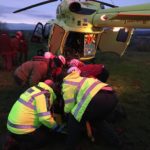 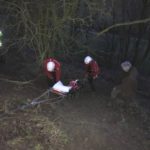 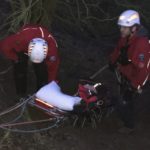 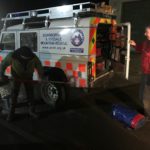 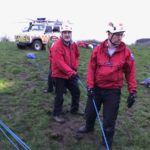 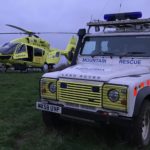 Alerted by North Yorkshire Police to reports of a gentleman who had become separated from his wife while walking in woodland north of Helmsley.  In identifying likely search areas our Incident Controllers established these to be in Cleveland MRT area.  We were in the process of handing the incident to Cleveland when the two teams were notified that the couple were now safe and well and back at their car.  Teams stood down thirty minutes after being called.