Keep returning to this page for detail on our incidents through 2021.

Called by North Yorkshire Police over concerns for the welfare of a high risk vulnerable male last seen on the northern outskirts of Scarborough.  Our Incident Controllers were travelling to join up with the police when we were advised that the gent had been located by the police as a result of a reported sighting in town.  The incident lasted for around 30 minutes with three incident controllers involved.

Deployed to farm in the Esk Valley above Sleights on the edge of the North York Moors.  A gentleman had suffered a fall and sustained a suspected hip injury.  A crew from the Yorkshire Ambulance Service were with the gentleman but were unable to get the ambulance to the farm due to poor road conditions, snow and ice.

The team initially deployed to Sleights before sending team members with stretcher, vacuum mattress and casualty bag (think large fleece lined sleeping bag) to close to the farm in a couple of our 4×4 team vehicles.  Once secured in the stretcher we carried the patient to the waiting ambulance for transportation to definitive medical care.  The team wish him a speedy recovery.

Twenty three team members and three team vehicles deployed for two and a half hours in case of the need for a protracted carry out but we only sent the minimum of people to the scene to reduce any COVID-19 risk. 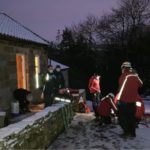 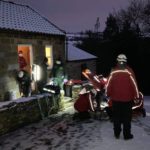 Called by North Yorkshire Police to reports from a resident of Dalby that they had been approached by the occupants of a car which was stuck in ten inches of snow on the hill descending the forest toll road from Adderstone towards Staindale.  The group from the car had approached the resident having walked to the house as they had no mobile coverage to call for help. The individuals were not dressed for the prevailing and previously forecast conditions.   Our two Land Rover crews were dispatched from the ongoing tasking in Rosedale and in addition a team four wheel drive ambulance/minibus was dispatched to the scene.  Upon arrival it was determined that in addition to being stuck the vehicle had a flat battery so was recovered to a parking area by one of our vehicles and the occupants, now very cold and wet, were delivered to safety in the team minibus.  While driving into Dalby we came across other stranded vehicles which were also recovered to the road and escorted to the main road.  Eight team members deployed for three and a half hours including refuelling, returning to base, washing down and deep cleaning the vehicles.

At the requested of Ryedale Local Resilience Forum we collected a number of sandbags from the council depot in Malton and delivered them to two homes at risk of flooding in Rosedale Abbey village.  This request was due to the adverse winter conditions on the route into Rosedale and the need for four wheel drive vehicles.  Two incident controllers and two dual crewed vehicles deployed. When the task completed at approximately 16:15 they all moved onto incident 05/2021.

Called by both Yorkshire Ambulance Service and Yorkshire Air Ambulance to an elderly male who had become unwell and collapsed in arable land south west of Hovingham.  The patient was carried to the air ambulance and airlifted to definitive medical care.  Eighteen team members and two team vehicles deployed for an hour and ten minutes.

Called to assist Yorkshire Ambulance Service in the extraction of an individual with a suspect hip injury sustained from impact by a falling tree.   Fifteen team members and two team vehicles were travelling to the scene when we were stood down as there were sufficient people on scene to carry the patient to the waiting ambulance. Activation was for approximately twenty five minutes.

Called by North Yorkshire Police to reports of a lady missing from home in Snainton. The lady was found safe and well by a mobile police patrol shortly after we were called.  Twenty nine team members deployed for thirty minutes.