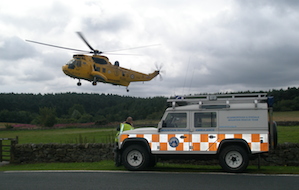 North Yorkshire Police called the team to assist in the search for a gentleman suspected to be missing in the area of Scalby Mills, Scarborough.  Working with the Maritime and Coastguard Agency team from Scarborough and a police helicopter we conducted extensive searches of the open areas as requested by NYP with no result.   Team stood down at 07:26.

The team were called out this evening by North Yorkshire Police to search for a party of six walkers attempting the Lyke Wake Walk.   The group had left Eller Beck earlier in the day and become disorientated before reaching Jugger Howe.  The party had called the police by mobile phone to report two of the party were unwell and needing evacuation.  Hill parties were deployed and the group were sighted and evacuated by RAF Rescue Helicopter 128 on route to the RV for a briefing.   Four of the party were recovered to the Jugger Howe layby, the other two were taken on to Scarborough hospital.  No further details at this time.  Team stood down at 20:39. More on this incident at the following link and here and here.

The team, Cleveland search and rescue team and RAF Rescue 128 helicopter were called out at 17:30 this evening by Yorkshire Ambulance Service to assist with the rescue of an injured person in woods at Ampleforth Abbey.

The team and Scarborough Coastguard were called out by North Yorkshire Police this evening to search for a missing elderly vulnerable male in the area of North Bay, Scarborough. The gentleman was found within 100m of the proposed RV as the team activation was taking place.

Team alerted by North Yorkshire Police at 12:45. Two ladies had become separated while walking in the area of Burn Howe Moor and requested assistance by mobile phone. One found her way to the road unassisted, the team met up with the other in the Helwath Beck area as she was heading off the moor and walked with her out to the road. Team stood down at 14:00

The team were put on standby to assist North Yorkshire Police to search for a 59 year old female missing from home since Friday afternoon in the Scarborough area. The lady was found safe and well before we were asked to deploy. Team stood down at 23:15.

Team placed on standby by from Humberside Police to assist in a search for a vulnerable male missing from home in the Stamford Bridge (York) area. Gentleman found safe and well and returned home before team were activated. The team were stood down at 16:28

Search callout earlier this evening for a gentleman missing on Glaisdale Rigg overlooking the Esk Valley. He had been working on the moors through the day and had not returned home as anticipated. Teams from Cleveland Search and Rescue Team, RAF Leeming and helicopter from RAF Leconfield were also deployed. The gentleman was found fit and well not far from his last know position and flown off the moor by the helicopter. The teams were stood down at 23:00.

Search call out to assist North Yorkshire Police search for a female significantly overdue from walking her dog in the Gristhorpe area. Lady found safe and well while the team were being mobilised.

Search call out at approximately 04:30 today (28th October) to assist North Yorkshire Police and other agencies to search for a gentleman missing from home in the Filey area. The gentleman was subsequently found safe and well by a Maritime and Coastguard Agency search party deployed to the north of the town.