A very happy ending to one of our rescues

Scarborough and Ryedale Mountain Rescue Team helped by those it helps. 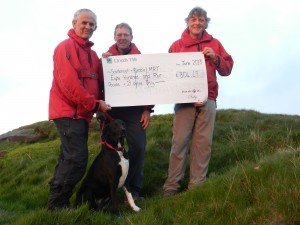 Roger Hartley, incident controller on the day, John Robinson, ‘team’ Vet and Mark Saunders, first on scene and find site manager on the day. Ruby and cheque in the foreground.

On New Year’s day 2013 the team started its count of rescues for this period with an unusual tasking from North Yorkshire Police.

Two people, Mr Owen Danter and partner from Beverley, East Yorkshire had been out walking with their three Labradors. They had parked at Levisham Elbow on the North York Moors and walked off past Skelton Tower north towards the Hole of Horcum.

When they reached the high escarpment of Yewtree Scar above Newtondale Halt one of the Labs, Ruby, got too close to the edge and slipped through the heather. Owen’s partner went to see what had happened and slipped as well but managed to stop herself falling all the way to the bottom.

Owen phoned the police on 999 and asked for assistance. The police in turn contacted Scarborough and Ryedale MRT and asked if we could affect a rescue.

We were able to call Owen and got a rough location, the team were subsequently called out and after about an hours searching the couple and the injured dog were located.

When the team arrived at the accident site the owners were with the injured dog which was in obvious distress.

As one of our team members is a qualified vet, Ruby was soon in good hands. She was given sedatives so we could carry her to the awaiting team Landrover without further distressing her. Ruby had badly dislocated her hip, injured her back and was also suffering from internal bleeding. SRMRT evacuated her to the duty vet at Pickering, where by tea time she was heavily sedated, on a drip and described as stable.

20 team members took part in the search and rescue which was completed 4 hours after we were called.

Over the last six months we are delighted to report that Ruby has made a full recovery and that Owen has joined the team as a trainee operational member deploying on his first live incident last month.

Owen also recently ran in the Beverley 10k in support of the team and raised in excess of £800 which Ruby recently ‘donated’ to the team at one of our training evenings.