Busy weekend for the rescue team

A roundup of the recent weekends activities

On Thursday morning Scarborough & Ryedale Mountain Rescue Team (SRMRT) were proud to receive a cheque for £400 from the owners, staff and customers of The Goathland Hotel.  The Hotel has been a long time supporter of the team who couldn’t function without such donations. Goathland is one of the team’s hotspots for rescues; rarely does a summer go by without the team being seen at one of the waterfalls or on the surrounding hills.

On Saturday the team were supporting an annual fundraiser in the Hardmoor Princess challenge and a street collection in Whitby when they had to respond to a call from the ambulance service to assist in recovery of a mountain biker in Dalby Forest. The cyclist had gone over the handlebars and was suspected of having severe injuries. As the team were first on scene they packaged the casualty and called in the RAF Seaking for onward transportation to James Cook University Hospital.

Later that evening and into Sunday morning they received a further call from North Yorkshire Police to assist in a search for two lost walkers near to the Flask Inn on the A171. Father and daughter were completing the Lyke Wake Walk which runs from Osmotherly to Ravenscar. Within 5 miles of the end of the 42 mile walk they found themselves lost near Langdale Forest North West of RAF Fylingdales. Following information from the rescue team the Police helicopter was able to locate the lost walkers. Team vehicles were then dispatched to recover the walkers who were mildly hypothermic after their ordeal. 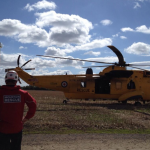 Rescue Dalby, Shows the Seaking waiting to receive the casualty 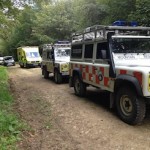 Rescue Dalby, shows the casualty site with our vehicles 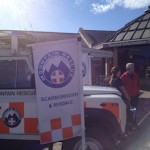 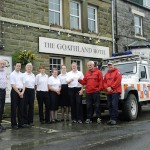 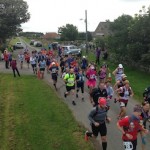 Start of the Hardmoor Princess