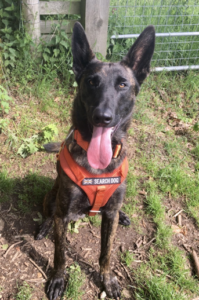 Duke is a Dutch Herder x Malinois and was born on 28.03.2018. He came to live with Anni his handler on 21.05.2018 and Duke qualified as the Team’s search dog just over a year later on 12.06.2019. North Yorkshire Police Dog Section licensed him for searching. He is imprinted on finding human scent in the wilderness and does open area searching, tracking (hard and soft surfaces). He can also find objects with human scent on such as mobiles, keys etc. Duke is trained to ignore all stock and game, and he has a good level of obedience. His favourite toy is a ball on a rope as he loves to play tug and chase it.

As the nights begin to draw in this short stroll which follows public paths over land belonging to the Macdonald family is just the ticket for a November afternoon.

Duke has graded this walk as 2 paws as it contains some steep slopes and can get boggy in wet weather. But, like all Dukes dog friendly routes, it does not contain barriers. 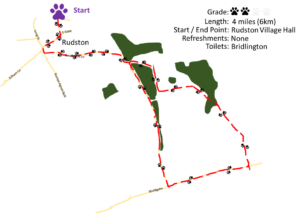 Starting at the village hall take the path between Gypsy Race and the children’s play area. This emerges onto Eastgate, where you turn right and walk up to the main road. Turn left and, as the bends round to the right, stay left onto Burton Agnes Balk and then turn, almost immediately, left into South Side Lane.

After passing the entrance to the water treatment works the tarmac lane turns into a rough track.

Follow the track around Zigzag plantation into the locally-named “Hilly Grass”.  On your left you will see Thorpe Hall, home of the Bosville Macdonald family for the past 200 years.

After passing through a gap in the trees you will see Wold Gate.  This road was once a prehistoric trade route, used later by the Romans to get from York to the coast.  Turn right at the road and follow it for ½ mile.  Watch out for traffic. On a clear day gaps in the hedgerow on you left reveal views south over the Wolds and eventually out to sea where you can see distant ships and hypnotic wind turbines.

The next bridleway sign points to a wood.  Follow this back to South Side Lane where you began.