The Hardmoors Princess does it again

A chance remark by the team on Facebook in Summer of 2013 that we had lost two significant fundraising events because of  callouts on the day got Scarborough resident and stalwart of the Hardmoors Ultra Marathon team Kelly Jackson thinking how she could help.

In a few short weeks she had dreamt up the 31 mile Hardmoors Princess Challenge, obtained the necessary permissions, got entry forms out, booked the hall and on the last weekend of August ran a hugely successful event based out of Ravenscar Village Hall.  Following the event she donated the proceeds from the challenge to Scarborough and Ryedale MRT, easily making good the moneys we had lost.

This year, never one to sit on her laurels and with a little more time, Kelly organised the second Hardmoors Princesss Challenge, again on the last weekend of August.  Not content with one event this year, in addition to the 31 mile event, she created the Princess Short n Sweet Challenge, an 8.5 mile race on the same day.

The team were delighted to be invited to the Hardmoors Goathland Trail Marathon on Saturday 8th of November to be presented with a cheque from Kelly for the superb total of £2315.51 raised through this years Princess events.

This is in addition to another large contribution on the day as a result of us being called out (again) while supporting the event back in August.  On hearing we were leaving Kelly took one of our collecting box and passed it around competitors who were in the hall at the time and then handed it straight over to us.

We are truly humbled by kindness shown by Kelly and the wider Harmoors community. 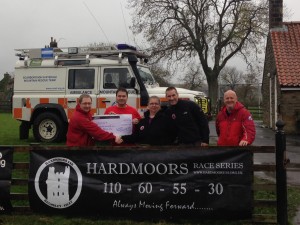