In the Hot Seat – The new kid on the block

Each month we put one of our team members “In the Hot Seat” with a series of questions designed to get an insight into their personality. This month it is the turn of Steve Martin. Steve is one of the newest team members, being one of the 2020 intake of trainees.

Introduce yourself in 280 characters or less

I’m Steve, originally from Barnsley currently living in Scarborough. I live with my wife, Sophie and Son James. I have recently begun working in the renewable energy sector after spending 22 years in the British Army. I’m a passionate mountain biker but have a love for all things outdoors. 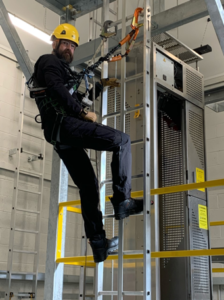 What is your favourite book, film or music?

So many to choose from, I couldn’t narrow it down to one film but a book I could read over and over again would be The Valhalla Exchange by Jack Higgins. It has you gripped every time. It’s a story about the supposed escape of Martin Bormann in the last days of Nazi rule of Germany. Edge of your seat stuff that really makes you wonder if it’s fiction or non-fiction.

The Team looks for its new members to either be experienced hillwalkers or mountaineers with great local knowledge. What is your “secret” walking, climbing, mountain biking route in our area?

As I am still relatively new to the area, I am still discovering a lot of the local countryside myself. However, Living so close to the sea has meant I have explored much of the coast line from Filey to Teeside. I have taken up paddle boarding and get out in the sea as much as I can. I am often found on my mountain bike in Wykeham Woods discovering new trails every time I go.

Team members are expected to be self-sufficient for 24 hours regardless of the environment or conditions they operate in. What one item do you carry in your callout kit that you cannot do without?

Well, having deployed all over the world operating, fighting and surviving in various environments, from the plains of Africa to the South Atlantic to the Middle East the one thing that has always been safely packed and easily accessible has to be Kendal Mint Cake. Energy when you need it, morale and always refreshing.

All Operational team members are expected to maintain a rolling annual commitment of 150 hours to the team. What would you do with these hours if you weren’t on the team?

Probably, annoying the family by dragging them out on random navigational exercises. I have just bought myself a campervan and am in the process of renovating this so my weekend would be exploring as much of the countryside as possible.

Team members are often deployed in search parties consisting of 4 people, a party leader, a casualty carer, a navigator and a radio operator. If you were a party leader who would you pick to be in your ideal search party? (They can be anyone – alive or dead)

Firstly, my Casualty carer would be Emily Blunt, my decision on this was solely based on the fact that she has a very calm demeanour and in no way was my decision influenced by her beauty. My choice of Radio operator would be David Attenborough, with such a calm and influencing voice how could you possibly listen to anyone else over the airwaves, also in the very unlikely event that we became navigationally embarrassed he could entertain us with stories of his daring exploits around the globe. My Navigator would be my wife as she is always telling me what to do, where to go. 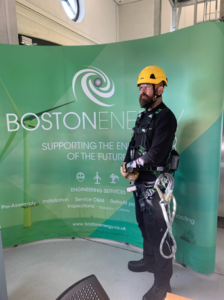 What is your biggest regret?

My biggest regret would be, that I never got to see the Stone Roses live in concert. I still blame my parents for waiting 5 years between me and my sister.

If you had a time machine, what one piece of advice would you give yourself when you first joined the team?

Be prepared for Andy Holtby’s (the training officer) sense of humour.

If there was to be a film about the team, who would play you?

My wife informs me that if someone were to play me in a movie it would be Clint Eastwood, as he scowls a lot, doesn’t talk unless he needs too, and has a general disdain for incompetence. I don’t quite get that to be honest.

Who or what would you be in another life?

In another life I would have liked to have been an Astronaut, since I was a small boy I have always looked to the stars and wondered what is out there, and can we as the human race ever understand it and when does the possibilities become reality in how far we can travel and explore?

What is your superpower?

According to my family it’s the innate ability to annoy the hell out of them.