Earlier this month Scarborough & Ryedale Mountain Rescue Team were presented with a cheque for Â£385 from North Yorkshire Mountain Bike Orienteers from funds raised during the recent Moors Marathon event.

The cheque was handed over at Big Bear Bikes of Pickering who, along with the Forestry Commission, generously supported the event.

The North Yorkshire Mountain Bike Orienteering club organise at least one event in the county every month. At each event the challenge is to visit as many of the control points in the event area within a time limit using a pre-marked map.Â  The Moors Marathon held on Sunday the 18th of September attracted 58 competitors and was run over four distances of 100km, 75km, 50km or 25km respectively.

It was great to see 58 riders setting off in the sunshine on Sunday morning. Everyone seemed to enjoy their rides especially those who completed the 100k route. The 75k course had changed with riders heading down to Rosedale before using the beautiful singletrack along the edge of the moors by the River Seven. The 50k course had also been amended so that riders went through Stape instead of Rosedale Abbey to avoid climbing out of Newtondale twice. Navigation caused problems at times but hopefully the maps and route descriptions saved lots of riders from going too far off course.
Thanks to the Forestry Commission for waiving the toll charge and normal event fee, Richard Laley at High Rigg who allowed us to park for free, Jens Strain for drawing an excellent map free of charge and Big Bear Bikes for providing the commemorative mugs free of charge. The event has made a healthy profit of Â£385 which will be donated to the Scarborough & Ryedale Mountain Rescue Team.
Thanks also to everyone who helped on the day. My wife, Barbara, who ran registration and the finish then wrote out your certificates, and the checkpoint marshals â€“ John Dixon, Jens & Eileen Strain, Michael Brough, Andy Crossley, Alan & Louis Billington and Frank & Becky Appleton. 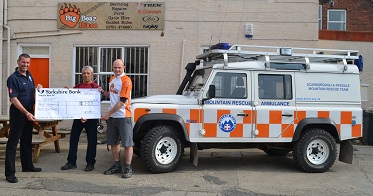