Joining team members from the Cave Rescue Organisation, Cleveland Mountain Rescue Team, Swaledale Mountain Rescue Team and Upper Wharfedale Fell Rescue Association David Edwards, Neal Ingram, Ian Peckett and Stuart Ward represented the team at this year’s awards ceremony held in the Garden Rooms at Tennent’s Auctioneers in Leyburn on Friday night the 10th of October. They were delighted to be accompanied by guests Amy Bloomfield and Danielle McLeod. Over the last year Amy has raised considerable funds for the team, Danielle was representing Touchdown Offices in Easingwold who have recently provided significant sponsorship for the team.

In welcoming guests and opening the event the Dave Jones, Chief Constable and Julia Mulligan, Police and Crime commissioner said:

“We wish you a very warm welcome to this year’s North Yorkshire Search and Rescue Presentation night here at Tennent’s Leyburn.

We extend a particular welcome to the Lord Crathorne who has recently retired as the Lord Lieutenant of North Yorkshire. During his service Lord Cawthorne has been and continues to be the Honorary President of Cleveland Mountain Rescue team and Patron of Fell Rescue Organisation. He is well acquainted with the good work the Rescue team do and the service and reassurance they offer to the residents and visitors to North Yorkshire. We also welcome Her Majesty’s Lord Lieutenant of North Yorkshire Mr Barry Dodd CBE .

We have over the years grown used to having the fantastic support of the Search and Rescue teams and have come to depend on them for help to delivering a specialist search capability. We could become complacent in our relationship with them but thankfully there are constant reminders of their dependability, initiative and professionalism. The image of the teams as like minded, outdoor folk doing a voluntary role in the community has long being dispensed. Yes they are that but so much more.   They have worked with the Fire Service, Ambulance, Air Ambulance and RAF and now have the ability to communicate and operate throughout the UK. An example was where the RAF flew experts from the Cave Rescue Organisation to Wales to assist in a fatal cave-diving incident. As well as a long list of other life saving deployments the teams played a vital role in the recent Tour de France. Sidestepping the various logistical obstacles they repositioned their assets in order to provide an enhanced service and keep safe all involved in the event.

We are proud to be associated with the five Search and Rescue teams in the North Yorkshire Police area and it is an honour to host this event in recognition of their hard work and professionalism.

Thank you to Tennent’s and Keela for sponsoring this years event. Also to the irreplaceable Tony Peers for volunteering to be Master of Ceremonies for the third year running.

We are sincerely pleased that you are able to join us tonight in celebrating and recognising the extraordinary contribution the award winners have made to search and rescue but also remembering the vital work of the teams as a whole’.

Neal Ingram accepted an award on behalf of the whole team and a cheque for the team to the value of £4000 from Chief Constable, Dave Jones and Police and Crime Commissioner, Julia Mulligan. The citation read:

North Yorkshire, the City of York and both National Parks provide world renowned locations for walkers, climbers underground explorers and outdoor enthusiasts form around the UK and word wide visitors. The geography of North Yorkshire is rugged and isolated by changing weather conditions can quickly provide an inhospitable environment for visitors who can and do find themselves in difficulty.

Your dedication to providing a fast, efficient and professional response to emergencies, often working in harsh conditions and in the most isolated regions of the county deserves the highest acknowledgement. You are often called upon to support the Emergency Services in a variety of incidents and are always willing to provide unparalleled levels of support to the police to bring about the safe recovery of those in difficulty. 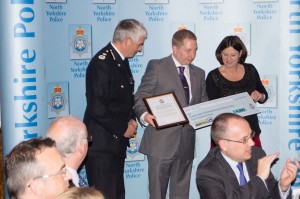 Dave Edwards received an individual award from the Chief Constable for his commitment to Scarborough and Ryedale Mountain Rescue Team. The citation read:

As well as being an incident controller David lives close to the base so is generally on of the first to be called to an incident either as an IC or driver.   David also spends significant time fundraising for the team and spreading the word through talks, visits and displays. To date this year David has attended 86% of incidents and committed almost 300 hours to team activities (and held down a busy day job). 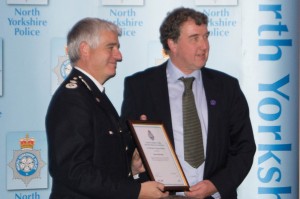 David Edwards receiving his individual award from the Chief Constable

Over the last couple of years Ian has created a highly efficient medical sub committee within the team. Working with this sub committee Ian has significantly enhanced the team medical training resulting in 40% of the team being trained and qualified to Casualty Care level with a further group of team members working towards examination later this year. Under Ian’s guidance the sub committee have also overhauled the medical equipment carried by team members and in team vehicles ensuring the best possible care for those we are called out to help. Ian recently qualified as an Advanced Casualty Carer. 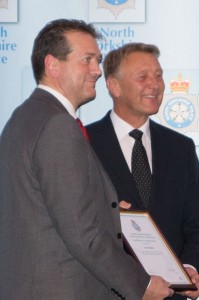 On a lighter note here are a few more pictures from the evening. 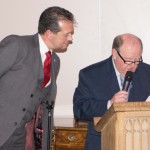 Ian Peckitt (left) impatient to see what Master of Ceremonies Tony Peers has to say about him. 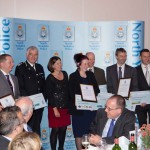 Representatives from the five teams with the Chief Constable and Police and Crime Commissioner. 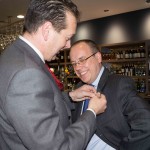