The popular, yet demanding, all terrain event starts from Ravenscar village hall and runs south to Cloughton along a combination of roads, public footpaths and the old Whitby Scarborough railway line before returning along the scenic cliff path to Ravenscar.

Despite a strong north easterly wind and driving rain reducing the temperature to something feeling close to zero degrees centigrade the event attracted some ninety entries.

The race was started by Geoff Mortimer of Construction Marine Ltd, Leeds who was kind enough to sponsor the event this year.

The first runner, Andrew Huddleston was back in a very respectable time of 1:31:57.  The first lady, local resident Cathy Wood, finished in an equally impressive time of 1:50:35.

For a number of runners this was their first event since last week’s London Marathon and for one, Anthony Corbett it provided the opportunity to present the team with a cheque for £75 raised in sponsorship last weekend when he was running on behalf of Mountain Rescue.  Anthony tells us he has similar gifts for a number of other teams in the North Eastern Search and Rescue Association (NESRA).

Prizes were awarded to the two winners by Geoff Mortimer of Construction Marine Ltd, Leeds and Assistant Chief Constable Sue Cross of North Yorkshire Police and President of North Eastern Search and Rescue Association. Sue is a long-time supporter of the team and the voluntary Search and Rescue service we provide.

The team web site www.srmrt.org.uk will have a full result list later this week.

Our next fundraiser will be a talk by zoo vet, Matt Brash titled ‘Chicks, Chimps and Chinchillas’ at the Milton Rooms Malton on Friday 25th of May with our next challenge event, the ‘Saltergate Circuit Challenge’ on Saturday 6th of October.

Some feedback from our supporters and pictures below. 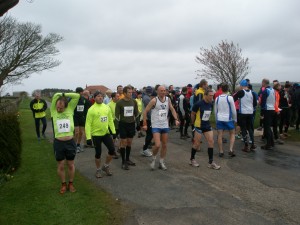 Runners assembling at the start 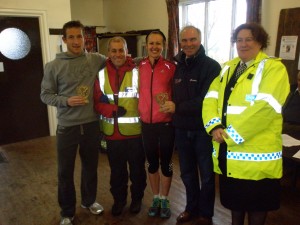 Anthony Corbett handing over a donation of £75 to Mark Saunders of SRMRT. The money was from sponsorship Anthony raised for Mountain Rescue while competing in last weeks London Marathon. Anthony tells us he has similar donations for the Cleveland, Swale and Teesdale teams. Thank you for the support from all at SRMRT.