We are now stood down from the York floods.

As the flood Major Incident in York and along the Rivers Ouse and Foss turns from the rescue phase to the recovery phase our thoughts go out to the residents and businesses of York and surrounding area as they return to their properties and scenes of devastation. They now begin the long and thankless task of cleaning up, rebuilding and attempting to return to normality. 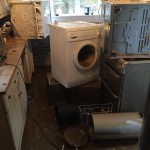 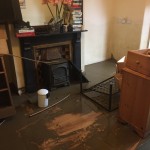 For us it is time to reflect on the immense effort all the agencies put into the operation and move on to our next incident and wherever that will take us.

In closing this event off we focus here on the Mountain Rescue volunteer effort and those who provided us with direct support. 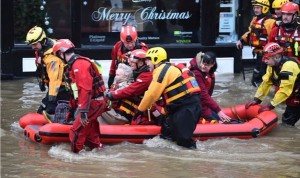 From a team perspective we deployed at 20:29 on Boxing Day to a Flooding major incident in York.  As part of established procedure one of our incident controllers deployed to ‘Silver’ Command at the North Yorkshire Police Force Control in York as the Mountain Rescue advisor while the rest of the team assembled at Archbishop Holgate School just outside the York Inner Ring Road on the Hull Road in York. The school is designated as the rest (or evacuation) centre for those impacted by the flood. This was to become our home for the next 48 hours and the ‘Bronze’ control for all the deployed voluntary water assets. 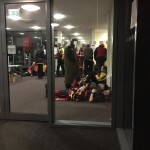 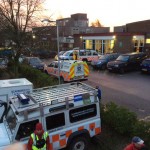 As the ‘local’ team it fell to us to mange the incident at this level and we quickly had 24 fully equipped operational volunteers deployed for the first day (which lasted the full 24 hours). For the second day we had 26 troops on the ground. We also managed the tasking of the various visiting Mountain Rescue including Fell, Cave and Search teams along with assets not formally associated with Mountain Rescue England and Wales but with similar water skills and qualifications. Hard to put together a definitive list of teams as many were composite teams deploying under a single team name but in the order of 20 teams attended made up of around 250 Mountain Rescue people from all four corners of Mountain Rescue England and Wales.

We also received invaluable help for the St John Ambulance Brigade and Yorkshire 4 x 4 response UK who transported people we had recovered to dry land onward to the rest centre, they drove community nurses and carers to housebound patients, ferried the press around and provided invaluable local knowledge to guide visiting teams to incidents.

Our first tasking through Saturday night and Sunday morning was to accompany Police Officers visiting houses along the River Foss to warn people living in the risk area of the flood and offer to evacuate them to a place of safety. This quickly became a water based exercise as the water rose and very soon we were doing this on our own as police officers were deployed elsewhere on higher priority calls.  At the height of activity we had 12 water rescue teams working through the streets of York, these teams were generally made up of a boat or raft, at least 6 flood water rescue technicians or water first responders and 4×4 transport for the people and equipment. 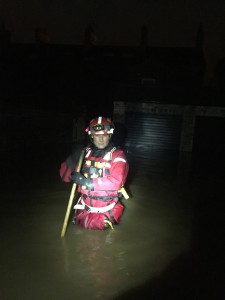 Many residents chose to either make their own way to safety or stay in their property but we very quickly had a considerable number of families and individuals accepting our offers for help. After a slight lull in the early hours of Sunday morning the routine door knocking was taken over by people realising the situation was worsening and calling 999 or 101 for help and we started receiving individual tasking to specific addresses from Silver. Once it became light we also started receiving specific requests to take district nurses and carers into property to treat housebound patients whose houses were dry but were inaccessible to vehicles or on foot. 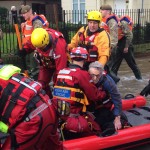 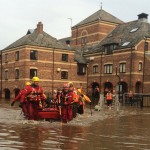 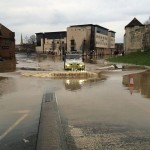 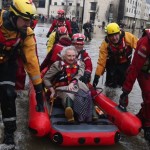 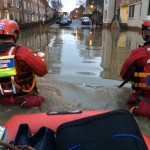 This routine continued through to Sunday evening when the team handed over to a composite team from North Wales led by Ogwen Valley to allow us to grab a few hours sleep. Ogwen were meant to be augmented by Fire and Rescue Service water teams but for some reason they never saw them so they ran the night shift on their own.

Overnight around 50 team members from Peninsula Mountain and Cave Rescue Association (PenMaCRA) had driven up to join us from Cornwall and Devon and with those who had stood down the previous evening returning the school car park was soon a mass of liveried Mountain Rescue vehicles, boats and rafts.

The focus of day one had been in the area of the River Foss but by Monday the situation had worsened and in addition to work in in the River Foss area assets were needed along the Ouse in York and south to Selby and Cawood.  In order to manage this wide area we deployed assets to a second Bronze based at Selby Police station with two of our incident controllers manning that site. PenMaCRA were deployed with them and were further supported by two local teams.

Meanwhile evacuations and house visits continued in York along with one off tasks such as taking engineers into the Barrage by boat. 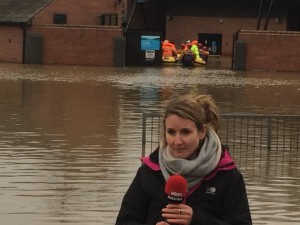 We estimate we evacuated in the order of 200 families along with one off tasking of the evacuation of 63 and 80 people from two hotels on the river front.  Again these are estimates as people changed their minds and stayed, other decided they wanted to leave when the saw us, the Fire and Rescue Service got to some before us and us before them (but at no time was it a race), others called for assistance but then self rescued.

What we are confident of is that all that wanted our assistance got it and were all quickly, safely and efficiently delivered to a place of safety.

When leaving a flooded property people need to take valuables, warm clothing, medications and all want to take their pets with them so we also evacuated numerous dogs and at least one parrot. 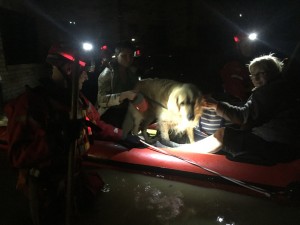 Important to such a Major Incident is the flow of public information and we had a number of journalists and professional photographers asking for interview and photo opportunities with us. They were quickly embedded within some of the water teams. The quality of the subsequent reports did real justice to the work of the volunteer teams and much content appeared in the national press, on the radio and TV. While MR people are naturally shy of publicity such coverage is critical to allow us to operate as self-funded charities. 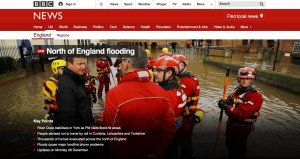 By Monday evening the waters had started to fall and the immediate situation in York was getting better.  PenMaCRA, having travelled so far, offered to stay on in case of any taskings early in the recovery phase.

On Tuesday we had one team member back in Silver and two others drove our control unit to York to give PenMaCRA somewhere to operate from. They had a steady flow of taskings throughout the day.  This allowed us time to clean up and turn round the rest of our equipment ready for the next incident. 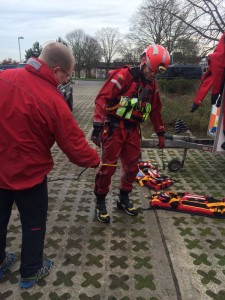 What we did not know was that this incident was to occur at around 18:00 on Wednesday. At around 17:30 we started receiving press reports of a Major Incident in Tadcaster to the west of our patch where the bridge joining the two halves of the town was in partial collapse.  Shortly after the team were mobilised by Silver to deploy to the west of the town where our control was established at the John Smith brewery.  PenMaCRA who were standing down from the days tasking were retasked to the East of the town.  The concern was twofold; firstly the collapse had ruptured a gas main passing over the bridge and there was a subsequent risk of explosion.  Secondly concern over the rubble from the bridge damming the River Wharfe and causing flooding upstream in the low lying properties.  In the event there was minimum need to evacuate people and the team were stood down later in the evening, PenMaCRA then started the long drive home.

The team were formally stood down from the incident late afternoon on the 31st having committed in excess of 1100 voluntary hours on the ground in support of the operation. 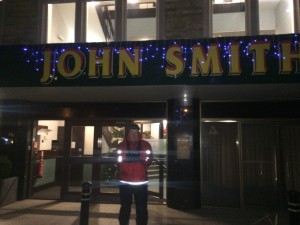 There is a well established system to deliver sustenance to teams on such deployments however outside of that we were truly humbled by the offers of help, the van with the barista coffee machine which kept us in coffee and hot chocolate for two days, the food and cake the public and shops dropped off and the van with hot freshly fried scampi for the teams as they were standing down on Monday evening. 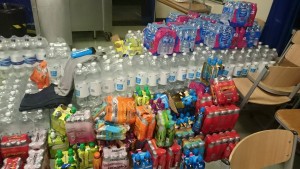 So that was our Christmas,  only it was not – we had previously been  called out at 03:38 on Christmas Morning to assist the Yorkshire Ambulance Service get to a patient in Rosedale over icy roads and nine of our water specialists and a driver were on standby for the flooding along the M62 corridor on Boxing day.  We are now on standby for Storm Frank.

We have to restock consumables such as batteries, rations, glow sticks etc, clean and repair equipment and repack ready for the next job.  We also desperately need to spend time with our family and friends who have been so understanding of us dropping everything and leaving home for such protracted periods.

If you would like to donate to the team then please visit our Justgiving page.